A new Windows release is approaching, and since it looks useable so far – unlike the Win8 versions – I will repeat this article. Just that it will be Win 7 vs. Win 10 then, and on current hardware with current games. As soon as the RTM version is done I will start benchmarking. Small sidefact: the WinXP x64 I’ve used for this post is still around and bootable, maybe I even include it in the new post – for the lulz…

About the test enviroment

I used my regular PC for this tests. This means it was performed on the following hardware:

Both Windows, XP and 7, are updated with all updates available and use the latest drivers for every component (I’m to lazy to look for the versions right now). All tests was done with a bit of background load. The following programs was running in the background and might slightly affect the results: Firefox 3.5, Trillian Astra, Xfire, NOD32 v4 (Win7 only) and some open folders (= explorer.exe processes). Where possible i took the output of the game itself, for the others i took „Fraps“ benchmark option and logged fps and min/max/avg fps as well (this was also done in the game which had a benchmark option).

The games used for this comparison: Quake 3 Arena (Ancient, but still funny and must have for a benchmark i think. Also i wanted a OpenGL game in here too) with the demo „four“ from the stock install, Trackmania Nations Forever (Included Benchmark option), Company of Heroes Opposing Fronts (Included „Graphics Test“) and Street Fighter IV, to have a recent game in.

Not much difference here, the one in the Minimum fps can be explained by pressing the benchmark hotkey while still in the loading screen which is also the source of the difference in the average fps. But Quake 3 is a pretty old game and we didn’t really expected differences here since all halfways recent hardware rig can run it at full details. 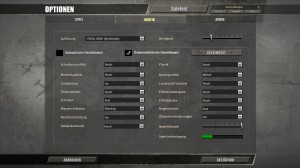 Graphic settings used for the test

Again, almost no difference in the results. CoH is no really recent game, but it is hardware intesive anyway because of all the physics and effects. I expected Win 7 to be near to the XP results, but never to be that near. 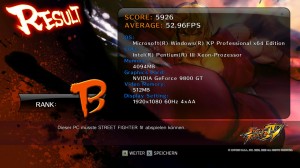 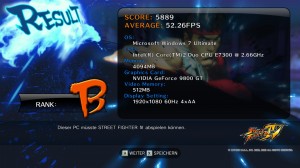 Almost no difference in the results, seems we have a pattern? Street Fighter IV is a very recent game and eats surprisingly much hardware but seems the Win 7 nVidia drivers are really good. I used the built-in benchmark option for this test.

This one breaks our pattern, i have no explaination for this gap of ~5fps. Maybe this was caused by background activity…  Maybe it’s because of Win 7? I don’t know.

The results shows us that Microsoft did a good job this time. They really learned from the Vista desaster it seems. Ok then again, the driver model is now a bit older and the graphic drivers improved. But anyway, i’m surprised that a Windows with this optic and all the features can perform that XP-like. I’m still not sure if it will replace my XP, but i think yes since more and more DirectX10 games are coming and in single player i wanna enjoy the best graphics i can get for my money. Also slowly XP support by game developers will be dropped and games requiring Vista or 7 will appear. But still, XP is simpler, less RAM intense and eats less hdd space. I would like to keep my XP, because of the fact that i need Windows really just for games and for that purpose XP would be good enough. But i will rather now get used to Win 7, then when i’m forced because of a game that i wanna play but that is not XP compatible… Overall Windows 7 seems decent enough for a gaming PC, unlike Vista.